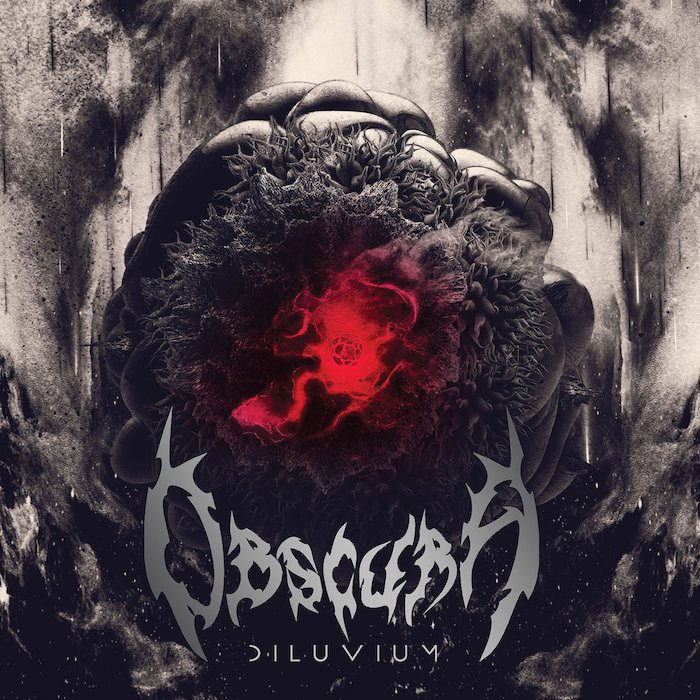 Founding Obscura guitarist and vocalist Steffen Kummerer said upon entering the studio for Diluvium that the album would be “diverse, progressive and colorful in every possible way.” Kummerer is right in the same way you’d be right in calling space pretty big. Diluvium is heavy and mindbogglingly technical without belaboring the point, yet incorporates enough straightforward writing and experimentation to keep any listener constantly hooked.

Diluvium is the end of Obscura‘s conceptual four-album story cycle that began in 2009 with Cosmogenesis. Following Cosmogenesis was Omnivium in 2011, after which Obscura would ultimately replace everyone who wasn’t guitarist and vocalist Steffen Kummerer. Bassist Jeroen Paul Thesseling was replaced by Linus Klausenitzer that same year, and just as Obscura began readying new material in 2014, drummer Hannes Grossmann and guitarist Christian Münzner also quit. Obscura refilled its lineup and in 2016 returned with the highly-ambitious Akróasis. Guitarist Tom Geldschläger was replaced by jazz guitarist Rafael Trujillo post-Akróasis recording sessions and here we are. Obscura 2018, standing firm and getting back into the groove of things despite waves of setbacks.

Diluvium is a more succinct listen than Akróasis, running one track longer and three minutes shorter than its predecessor. Which is exactly where Diluvium succeeds as a full album. Akróasis had a lot of great moments (and was one of my favorite albums of 2018) but suffered from being a little too experimental and long-winded at points without any real payoff. Diluvium walks along the fence posts between the blistering speeds and cosmic motifs of the first two story line albums and Akróasis-esque testing of the waters, but this time with results. Whether those experiments be the jarring neckbreaker of an opening rhythm in “Ethereal Skies,” the churning slow-motion death metal of “The Seventh Aeon,” or the Behemoth-like tom-heavy murk of “An Epilogue To Infinity,” Obscura masterfully weaves their defined sonic signature into Diluvium.

Going along with the condensed writing on the album is Obscura‘s even-keeled approach to featuring all four members of its quartet. Klausenitzer puts his virtuosity on display throughout Diluvium as he effortlessly matches and counters both Kummerer and Trujillo. All three stringsmen play an equal role on Diluvium, almost as if the album’s music was written originally on piano and transposed to fit two guitarists and a bassist. More importantly, nobody feels like an afterthought. Klausenitzer shines brightly on Diluvium with a plethora of excellently jazzy solos and even has his own layered composition on the digital bonus track “A Last Farewell” (which Relapse should reconsider into making the album’s actual closer).

Drummer Sebastian Lanser calls upon his years of experience with Panzerballett to bring more of a jazzy metal feel to Diluvium, going beyond a simple interpretation of Obscura‘s historically downright metal drumming. Lanser also digs deeper into his bag of influences and pulls out accented snare roll rhythms on akin to Leprous‘ choppy style, flat out backbeat-snare double bass drum sprints, and some cool Control Denied-era Richard Christy “how many arms does this guy have”-type grooves that incorporate tons of brass. Essentially, Diluvium is going to give you way more to talk about other than just how fast Obscura can blast and shred their way through a track.

Diluvium is melodically rich to the point where even the most blindingly fast parts are going to stick out and get stuck in your head. Sure, Diluvium covers all the technical death metal ground of the first three albums and some of the experimentation of Akróasis, but it explores so much new ground that in no way should it be thought of as a “safe” album. This is Obscura stripping down their own sound and rebuilding it from the ground up with acoustic guitars, more bass solos, more vocoders, varied drumming styles, and less technicality for the sake of being technical.

To put it simply, Diluvium is the sound of a rejuvenated band masterfully refining itself beyond what fans already considered pretty damn great to begin with.

Diluvium was listened to via digital download streaming through ROON. Audio was streamed through an AudioQuest DragonFly Black v1.5 into Sennheiser HD 598 Cs Closed-Back Headphones.

Mostly Yelling is a metal review site dedicated to supporting the artist. Reviews are published every Monday and Thursday. Contact me for any review requests at MostlyYelling@gmail.com.
%d bloggers like this: