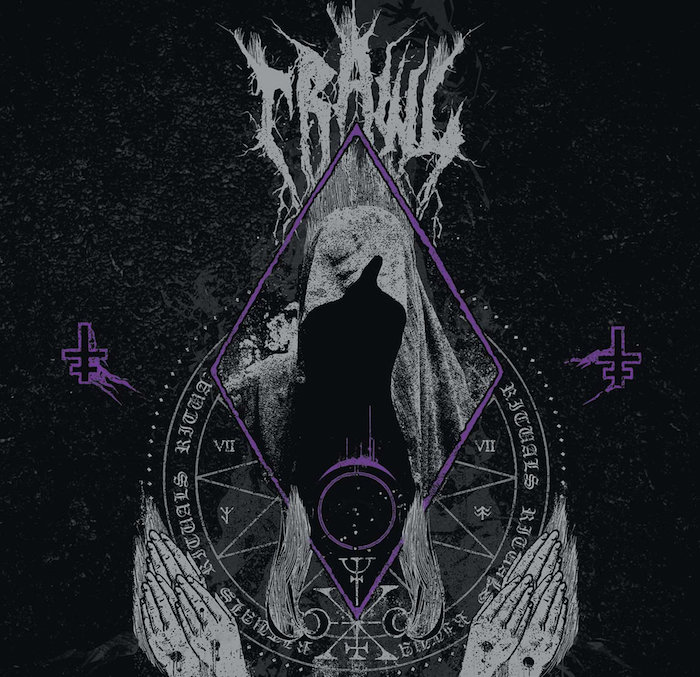 Dismember and Skitsystem have been dead for a while now. American bands have been riffing on variations of both their sounds over the past few years, but there’s something in the water of Sweden that makes the Swedes get it more right and truer to the classics than anyone else. Which is especially exciting when the two are combined into face-pummeling heaviness like Crawl.

Crawl’s debut album Rituals could easily pass as a long-lost relic of Swedish metal from 15 or 20 years ago. They’d have to slap a “remaster” tag on the front of the record to explain the slightly cleaner-than-Left Hand Path production, but given the vacuous guitar tone and vocals, the lie would be completely believable. That classic Swedish buzzsaw Boss HM-2 tone hacks away at your sanity through Rituals with its scratchy, almost sustain-less attack while vocalist Joachim Lyngfelt barks as if actively trying to make himself vomit. There’s nothing pleasing to the ear about Rituals. It’s an album that longs for the days of tape trading and being told “no” by most venues because they didn’t understand what the hell they were even hearing.

The construction of Rituals appears to be similar to a grind album in that it saves the longest song for last, but you’d also be wrong in assuming that. Songs like “The Stench” groan under their own weight with planned feedback between riffs and “Trail Of Traitors” plods along knowing the order of its victims doesn’t matter – they’re all trapped here. Closer “Coven Of Servants” comes in at nearly five minutes long, pretty much double the length of every other song, with a morbid, waltzing groove that slowly but surely decomposes right before your eyes. No matter the speed or the length, every song on Rituals attempts nothing less than to rip your head off and stuff your skull down your esophagus piece by piece. Aside from the aforementioned, Rituals is rife with d-beat and Trap Them-esque callback Swe-death hardcore. Satan help you if you’re hoping for a respite in the violence throughout Rituals, because you will find none.

One small detail about Rituals that weirdly made the record for me were the drum count offs at the beginning of every song. Some were on the cymbals, some were sticks clicked together, but it gives the album a very “live in the studio” feel. Like Crawl wanted to reach deep into the grave and pull out 25 minutes of bloody, disgusting death metal right then and there in the studio. Which is exactly what Rituals sounds like. There are no extraneous instrumentation or snapped-to-the-grid technical parts anywhere on the record. Just a trio attempting to destroy a room with the power of death metal. (I also realize Martin Sjögren played guitar and bass on the album, so it’s impossible for this to have been entirely live in studio. It just sounds like it.)

Crawl isn’t out to reinvent the wheel here. They’re out to put spikes on the existing ones and run a bunch of people over. For a debut album, Rituals is solid and acts as more of a historical document than anything. Which makes sense – Crawl has a lot of history to draw on for it. It’s not an insult, but in the end Crawl is a love letter to old school Swedish death metal through and through. At least that’s what they’re going for on their debut album, and they nail it.

There’s nothing new here. It’s what you love about Entombed, but now. Here’s hoping these guys can out-crust themselves the next go around.

Mostly Yelling is a metal review site dedicated to supporting the artist. Reviews are published every Monday and Thursday. Contact me for any review requests at MostlyYelling@gmail.com.
%d bloggers like this: